After surviving one of the longest travel days we have yet to endure that took us from Tokyo to Bangkok, Bangkok to Phuket, Phuket to Patong and ending with a tiresome 90-minute taxi drive in the middle of the night, we finally made it to our destination to a beach town on an island in Thailand.

As a last-minute improvisation to our travel plans before our next housesit began in Malaysia, we only had three days to make the most of the one country we were most excited about visiting. So after checking into one of the nicest hotels we have yet stayed in, right near the beach (at $20/night!) we began researching and planning all that we wanted to experience in those three short days.

Number one on the agenda was going for a swim in the ocean and getting some sun for the first time since Spain. We ate delicious pad thai at an outdoor restaurant, sipped on Chang beer and laid on the beach for way longer than our winter skin could handle. We played in the waves on one of the prettiest and cleanest shorelines and were overcome with the childlike wonder and pure joy of being tossed around by powerful waves. To me, there is no greater happiness and I would have been content to spend all three days right there.

But there was so much else to do and so little time. So we left to explore the streets of Patong, weaving through the stores and markets, tasting street food and marveling at the uniqueness of yet another country, another culture.

During our walk, we noticed the most common business was massage rooms. They were EVERYWHERE. On every street and corner, everywhere you looked, women were shouting as we passed, “Pretty lady, you want a massaz? I give you good price.” They were all very aggressive about it but seeing how much competition they were up against, I guess they had to be. So our second day we decided to go for a traditional $3 Thai massage. Unbeknownst to us, however, traditional Thai is a particular style of massage that includes bending, stretching, contorting, and other submission-type moves similar to what you would see in a UFC cage. It was, in fact, as awful and uncomfortable as if sounds. And to make matters worse, we were both sunburnt from our beach day so for us, it was especially brutal. But instead of tapping out, we both endured the pain and survived to laugh about it.

Our next adventure was to visit a sanctuary where dozens of rescued elephants are brought to live out their days in a loving, caring, compassionate environment. After years of abuse and neglect in zoos, circuses and tourist attractions that profited from their exploitation, this sanctuary worked to give the animals back the respect and dignity that had been taken from them for so long. Knowing that we had many options in seeing elephants, we did thorough research to make sure we found a place that focused on the rights of the animals. Sadly, there are still many companies that offer elephant rides, abuse them into compliance and use them strictly for turning a profit. We did not want to support this and were happy to find this sanctuary instead.

We learned a lot about these majestic and friendly creatures while participating in feeding and bathing them in a mud bath. It was fascinating to learn their ages (the oldest was 86!) and hear stories from their individual caregivers about their unique personalities. It is so cool that each elephant is assigned to a caregiver who is solely responsible for that one animal day in and day out so that they can build trust with them, creating a strong bond.

As gentle and sweet as they all were, I still couldn’t help feeling a bit apprehensive and intimidated when standing next to them because of their massive size. Nonetheless, it was an unforgettable experience and definitely one of our top 10 favorite memories on our world travels.

Our third and final day in Patong we decided to take a day trip to the northern part of Phuket to visit James Bond island, one of the iconic backdrops from one of the Bond movies. The trip did not start out on a good note, to say the least. Our driver showed up late to take us to a location on the other side of the island where we were meeting a large group of people who were also going on the tour. So to make up for lost time, he drove like a complete psycho maniac on curvy, sketchy roads to the point where I was nauseous and carsick and we were both in fear of our lives.

Once we arrived, barely on time to join the others, sick and upset, it took some time and effort to change our attitudes and begin to enjoy the day. The first stop was at an underground Buddhist temple in a cave where there was an enormous gold statue.

Outside the cave, we bought some hard-boiled eggs from a little store to feed the dozens of monkeys that were surrounding us. One of the little monkeys got impatient and aggressive with me and ended up climbing my body like a tree and snatching the egg right out of my hand, ripping my tank top along the way. We later learned in Indonesia, how NOT to interact with monkeys in the wild. For now, we were still naive and hopeful tourists, among a crowd of other naive and hopeful tourists just trying to get a cute monkey picture.

The second leg of the trip took us to an archipelago of Thai islands and caves where we kayaked all around and underneath the rock formations. We had a guide on the kayak who told us stories about the area and his life and gave us instructions when we needed to lay back in the kayak to barely slip underneath one of the caves. Then he made a heart-shaped leaf for us and took lots of photos, using it as a frame.

We joined another van with a different driver and drove on until we reached James Bond island where we hiked to the top for amazing views, swam in the clear waters and drank the coldest, most refreshing coconut we have ever had. 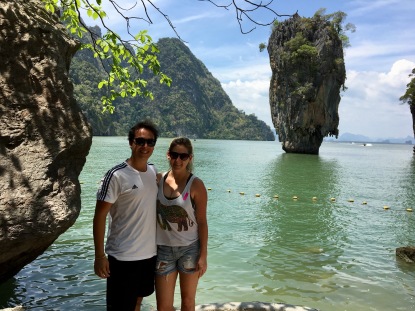 During our hike to the top we had a “small world” moment when we met some fellow Kansas Citians who recognized Daniel’s KC shirt. We chatted with them about our travels and their travels and exchanged contact info to keep in touch.

The third and final stop on the tour was for lunch at a Muslim village built over shallow waters. All of the houses and businesses are raised above the water on stilts connected by wooden walkways and centered around a golden mosque in the center. After having lunch at the restaurant, we were given some time to explore the village. Many other tourists opted out but we, of course, took full advantage of experiencing this completely unique and remote place. It was so special, in fact, that words cannot sufficiently describe the feeling that it gave me. It was something like a combination of fascination, wonderment, awe, surprise, curiosity, inquisitiveness all mixed with a bit of shock. I realized then that this feeling is exactly what I was hoping to feel by traveling, what I was hoping to gain from seeing first-hand how other people live in other corners of the world. And I never felt it stronger than I did on this beautiful little primitive, colorful, impoverished Muslim island village somewhere in the middle of the Indian Ocean.

We met some young children in the village who, to our surprise, in their perfect English, began a conversation with us. Further along our walk, a man came out of his house holding hands with a monkey in overalls, just casually strutting down the walkway. We both had to blink our eyes and do a double-take to make sure what we saw was real.

As if the day was not already jam-packed with cool, new experiences, we bought tickets to a Muay Thai fight for our final night in Thailand. As avid mixed martial arts fans, we were both very excited. We arrived early, bought some popcorn and beer and took our seats close to the ring. The live music started and we were immersed into the world of the humble sport of muay thai fighting. What made it different from other MMA was the pre-fight ritualistic dancing between the fighters, the live music and the sincere humility shown from the losing opponent to the winner. Watching a sport that focuses on respect for your competitor is truly special and something that every athlete can learn from.

We were a little sad to say goodbye to Thailand the next morning but also looked forward to our next venture in Malaysia, our 30th country in less than a year. We arrived at our housesit in Kuala Lumpur where we were greeted by our friendly hosts in a lovely high rise condo with a beautiful kitty named Bobby. The kind couple took us out to a neighborhood vegan Indian restaurant where we had one of the tastiest and most unforgettable meals while getting to know them.

Over the next seven days, we took full advantage of the fancy property, working out at the building’s gym and swimming in the pool. 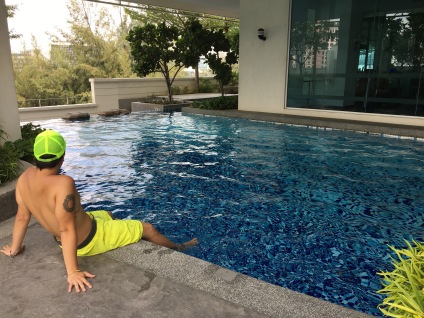 One day we were lucky enough to meet up with Alvin, one of Daniel’s old college friends from UMKC who had moved back to his home country. Alvin was eager to drive us all over KL, giving us a full tour of the city. He took us to eat at a couple of different authentic Malaysian restaurants, that only locals know about. We ate amazing, flavorful cuisine right off of a banana leaf, no plates! 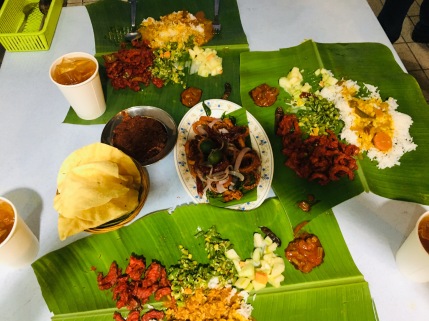 He then took us to China town where we tried durian, the infamous Southeast Asian fruit, known for its terribly strong smell. It’s so bad, in fact, that it is actually illegal to eat in many public spaces. After trying it for ourselves, we didn’t think it was all that bad. Our review was that it tasted like a mix of flavors, from mango to cheese to chicken. While an extremely odd combination of flavors, it was not as bad as many of the reactions we had seen on YouTube videos.

Alvin drove us all around the city, visiting some famous landmarks including the impressive Petronas Towers where we took some pretty cool photos. We were very grateful for his kindness and his time because we would never have been able to experience Kuala Lumpur in the same way without a local’s guidance.

Our last night in Malaysia, we braved the heat and took a trip to the colorful Batu Hindu Caves. We climbed the rainbow stairs next to the gigantic golden statue and explored the caves full of religious altars and decorations. It was another amazing experience and the perfect way to end our time in such a beautifully diverse and distinct culture. 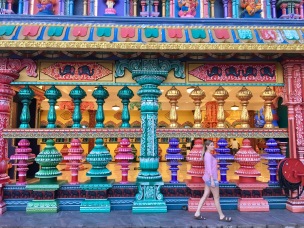 Next up… Bali, here we come!