I can remember very clearly back to my first encounter with a culture different from my own and the strong feelings of interest, curiosity and admiration that I felt. I became good friends with a girl from Korea in junior high and I loved spending time with her and her family, learning all about their food, their music, their language, their culture. I was absolutely fascinated by the differences between her family and mine. And I realize now, that this attraction to otherness has always been a part of me and always will be. It has been the driving force behind my desire to travel the world and has been my motivation to leave my comfort zone, to get out and see how other people live.

I will never forget the seemingly small moments that I had with my friend, Inkyo. Back then, I didn’t know it but those moments were actually the spark that led me to where I am today, on a little island in Indonesia.  Learning how to make paper origami animals, eating kimchi sitting cross-legged on the floor, watching K-pop videos over and over until I could recite the words and listening to the fast, eloquent language spoken between her parents and sisters influenced me in such a way that I will forever be grateful.

Here I am 20 twenty years later and I found myself actually visiting the beautiful country of South Korea and experiencing its culture first-hand.

We arrived in the very modern capital city of Seoul for a short visit that we squeezed into our itinerary between housesits. We knew we had a lot of ground to cover in a short time so we scheduled a tour for the following day, leaving the rest of our visit open for exploring the city on our own.

The tour picked us up at our hotel at 6:30 am and we headed towards the border between North and South Korea to visit the DMZ (Demilitarized Zone) between the two countries. As the most heavily militarized area in the world, it is also considered an active war zone. Despite this, it is actually still very safe to visit, so long as you follow all of the rules and do not cross the DMZ.

So after doing our research, we decided that this would be the most interesting and exciting way to learn about Korean history and get a glimpse into one of the most closed-off countries on earth. Our tour guide was very informed and educated on the humanitarian crisis that the world seems to know so little about and she was so enthused to share it with us.

Before entering the DMZ we first visited the Bridge of Freedom, a structure built to represent the peace and reunification that so many still long for. There was also a memorial to honor those affected by the unspeakable horrors of the Korean War.

We then entered the actual buffer zone where soldiers came onto the bus and checked everyone’s passports, doing an official headcount to ensure that the same amount of people came in and went out. It was a slightly intimidating experience to consider the seriousness of what we were doing and the repercussions for anyone not following the strict rules.

We arrived at a lookout point where we climbed to the top and had a vast view of several North Korean villages. There were standing binoculars that we could use to focus in on the villages and see their huts and farms and waving flags. It was quite an eerie feeling to be in such close proximity to a country that is completely closed off from the rest of the world.

The next stop took us to a man-made tunnel deep underground that was created by North Korea in the 1970s with hopes of invading Seoul. We spent about 30 minutes walking through this long, dark tunnel with hardhats on, hunched over in many places where the walkway was only five feet tall until we reached the several blockades put in place to prevent any further attacks that would result in a full-blown war. Again, it was an odd and rather haunting experience to be in what was once an extremely fragile and volatile place. 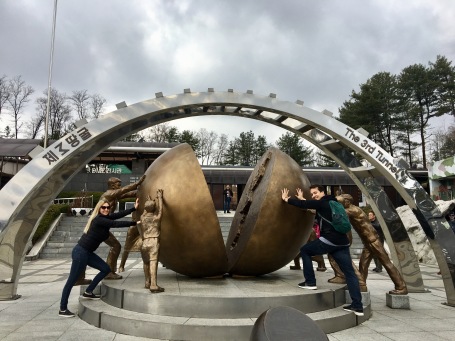 Our final leg of the tour was to visit Dorasan Station, the train station built in 2002 in hopes of connecting North Korea’s capital Pyongyang with South Korea and with the intent of encouraging friendly relations. The state-of-the-art station was fully finished and the tracks were laid through the entire route. Unfortunately, however, shortly after the project was completed, political tensions intensified and the station never actually opened. To this day, the political unrest continues between the two countries and unification remains unseen.

After a long day of an intense, yet unforgettable tour, we went to a local restaurant where our guide ordered a full table of traditional Korean food for us to sample. We tried kimchi, fish soup, beef brisket with rice, sushi, spicy vegetables and sipped on soju, a rice liquor made in South Korea. We passed on the silkworms that were being served out of a huge pot but we were told that the flavor is “earthy”, whatever that means. 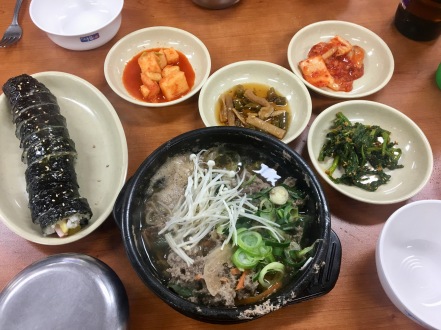 The next day we went to a food market where we walked around and marveled with curiosity (and a bit of shock) at the host of exotic foods that were being served to locals. One of the most popular delicacies, sold by most every street food vendor was live octopus. They cut off a leg at a time and serve it still moving. The tricky part, we learned, is chewing and swallowing it before it suctions itself to the side of your mouth or worse, your throat, which can be very dangerous. Needless to say, we passed up the live seafood and instead tried mung bean pancakes that were absolutely delicious!

Leaving the markets, we headed towards the Gyeongbokgung Palace, the largest of the five palaces of the Joseon Dynasty built in 1395.  There were hundreds of people dressed up in traditional Korean clothing, wandering around taking photos with the beautiful buildings as backdrops. It was so cool to see the outfits in such an authentic setting. 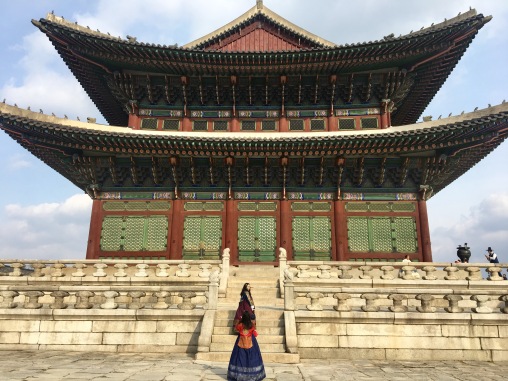 Walking back to our hotel, we noticed a large crowd of people holding signs in protest, with an equal amount of armed officers nearby. As we got closer, we noticed that they were gathered in front of the US Embassy and seemed to be upset with their president for not interfering or reacting with the recent meeting between Trump and Kim Jong-un and were actively expressing their concern. After the strong alliance developed between South Korea and the US during the Korean War, they feel very strongly about maintaining this positive relationship.

Our final day in Seoul we stumbled upon a cat cafe where we spent more time than we would like to admit. We paid a cover fee that included a coffee drink of our choice and an unlimited amount of time petting and playing with 18 cats of all different breeds. It was the cutest little cafe and worth every penny.

Walking more than ten miles around Seoul that day, we had the opportunity to take in all of the city’s amazing street art, statues and buildings that make it so beautifully modern while admiring all of the traditional temples, markets and palaces that represent the city’s origins. 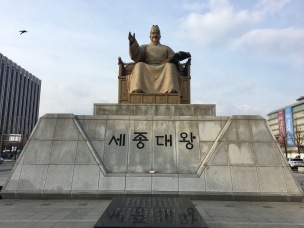 In the four days that we were there, we realized that we are most in love with cities like Seoul, those that have a perfect, seamless blend of newness and old school. And I also realized that after two decades, I was just as inspired and intrigued by the very culture that lit my travel fire so many years ago.