When you think of Dubai you probably, like most people, think of excessive wealth, luxury cars, tall buildings and 7-star hotels. And while these images do accurately represent this mega-city in the United Arab Emirates, there is also so much more to it than that.

Dubai is a city that has evolved to what it is today in just the last 40 years. Before that, it was nothing more than a vast desert. The Emirates have found a way to defy what is possible when it comes to constructing the tallest buildings in the world upon 100 feet of sand in the Arabian Desert where temperatures soar well over 100 degrees and rainfall is usually less than two inches per year. The technology and engineering required to achieve a working, liveable city in these conditions are extremely advanced and quite mind-blowing to learn about.

Everything in Dubai is considered to be a luxury. Upon our arrival, we were picked up at the airport from an Uber driver, dressed in a full suit at 5:00 in the morning and immediately felt a vibe that we were in a very unique place. After a much-needed nap and catching up on rest after an overnight flight, we headed towards the city center to explore. First going to the Dubai Mall, we were taken aback by the massive aquarium full of sharks and tropical fish. I don’t know of any other mall that has a shark tank for entertainment!

We stepped outside just in time to see the famous fountain show with lights and music, comparable to that of the Bellagio in Las Vegas. With the Burj Khalifa (the tallest building in the world) as the backdrop, it was quite a sight to see.

Taking an elevator up 146 floors to an observatory deck of the Burj Khalifa, the view was absolutely incredible. We were lucky to have a clear day, with no desert sand storms blocking our view and it was as exhilarating as it was scary to look down on all of the other skyscrapers. 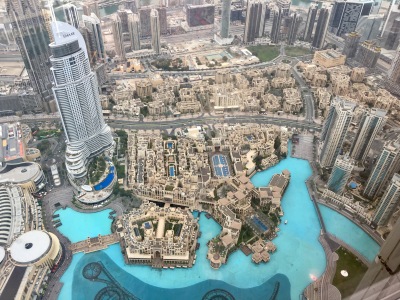 Throughout our exploration of Dubai’s main attractions, we couldn’t help but notice the degree of diversity in the people. We saw everything from the local Emirati to tourists to workers that had come to Dubai from all over the world. We learned, in fact, that there are people from 200 countries living and working in Dubai, making it the most international city there is!  You will see all different kinds of clothing and hear every different kind of language, making it the most unique and interesting place that we have seen.

Our first evening there we met up with homeowners, Julia and Simon, who we had house/cat sat for in London for five weeks. Interestingly enough, however, we never met them in person, as they live in Dubai part-time and had already left prior to our arrival. We had kept in touch and were in communication when planning our Dubai trip. They kindly offered to take us out to dinner to a fabulous hotel overlooking the fountain and Burj Khalifa so we could watch the building’s light show at night. They also chose the hotel so that we could order cocktails. Since alcohol is illegal in Dubai, you can only drink at hotels that have a special license. And because it requires a special license, drinks are not cheap! One cocktail cost $20.

We sat and talked with Julia and Simon for several hours, learning so much about the city of Dubai from people who have lived there for 12 years. We also learned that Annie, their cat who we fell in love with in London had sadly passed away the night before. So it was rather poignant timing that we were there to remember and celebrate their beloved pet while they were still grieving.

The next day we woke early to go on a desert tour. The two of us, along with a couple from the Czech Republic and two flight attendants from Korea, rode out into the Arabian desert in a 4-wheel Jeep. After letting some air out of the tires, we entered into the sand dunes where we spent a half hour “dune bashing.” What was fun at first, racing, spinning out and jumping over the dunes, turned into what felt like a never-ending roller coaster that I couldn’t get off. Having a bit of a weak stomach, I had to stop the driver midway and ask for a puke bag. Luckily, I never had to use it but it was a close one!

Once we got far out into the middle of the desert, the driver stopped and we all got out to sand board down one of the steepest dunes. Strapping our feet onto a board, we took turns gliding down until wiping out at the bottom. We were told to just sit down if we felt we were going to fall but instead we both fell forward resulting in a flip and roll. It wasn’t exactly the most graceful landing but thankfully didn’t hurt too bad to land in the sand. 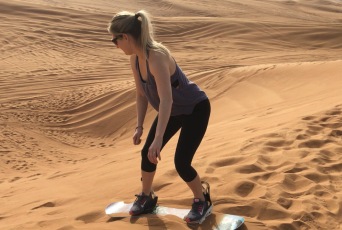 The next stop on the tour was a desert camp where large tents were set up in a circle over Persian rugs. We were greeted with tea and dates while our authentic Arabic brunch was being prepared. We then enjoyed tabbouleh, hummus, naan, pasta, beans, luqaimat (sweet potato donuts), and lamb. 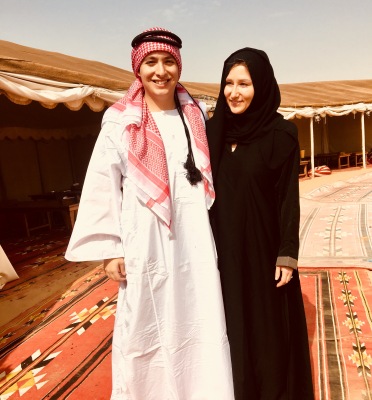 After eating we went on a short camel ride that took us around the camp. We really had no idea how massive the animals are until we were next to them! The ride wasn’t exactly the most comfortable but it was a fun experience, nonetheless.

The rest of the day we spent laying out at our rooftop pool with the Dubai skyline in the background. Luckily, we were there before the desert heat had reached its peak and the temperatures were quite mild and comfortable at around 80 degrees.

Our third and final day in Dubai, we wanted to see the marina, the Palms and the Burj Al-Arab, the 7-star hotel. But because the city is pretty spread out, it is hard to get around unless you have a car. So we booked a driver through our hotel and spent the afternoon seeing and learning about Dubai’s most famous landmarks. Our driver had moved to the city from India many years ago to make a better living than his home country could provide him. He was very friendly and super knowledgeable and we learned so much from him.

We rode out onto the Palm Jumeirah, the world’s largest man-made island and saw the Atlantis hotel, where there are underwater rooms for $25,000/night. We learned that the cost for dredging the sand and maintaining the island is a mere $1 million dollars per day. 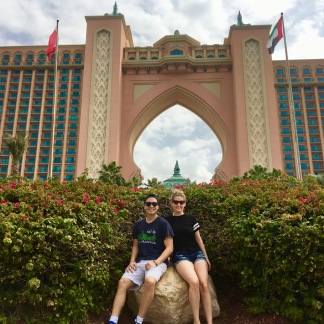 We took a walk along the Jumeirah Beach and through the Dubai Marina. We also rode by the site of The Dubai Creek Tower where they are building the world’s new tallest building that will far surpass the Burj Khalifa, standing at almost 1 mile tall! It will be open in 2020. 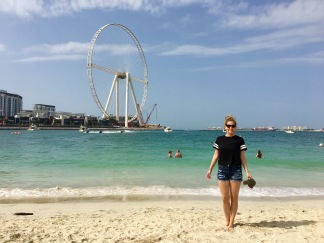 After a short visit in this multifaceted city, we witnessed all of its glitz and glamour and were completely awestruck by its splendor. However, through our own research, documentaries and conversations with friends who have lived there over a decade, we learned that the city’s flawless Disney facade masks a much darker, more complicated side.

It’s not the lap of luxury for everyone. As you can imagine, the millions of people who have immigrated there to find work do not have it so good. We sat outside of the mall one early morning for the tour pickup and watched hundreds and hundreds of workers getting off buses that are shipped from the outskirts of the city where they live in bunk beds, sharing a room with up to 10 people. They work relentlessly so that the wealthy locals and tourists can live their fairytale life. It was a bit shocking and disturbing to witness and consider the flip side of this dreamy destination.

The city also has the most sophisticated, extensive surveillance system in the world. From the time you step foot outside of your house or hotel to the time you return, you are being monitored. The cameras are so detailed that from the top of a skyscraper, it can read a text on your phone as you walk along the street. Dubai is very safe for this reason and the need for actual police on the ground is minimal. However, laws are extremely strict and if you are not aware, you could be jailed for simply kissing in public or failing to follow traffic laws. You can also be fined thousands of dollars, have your car confiscated and jailed (in prison where torture is acceptable).

We learned so much about Dubai during our visit – things that most tourists would never discover during their luxurious vacation. Learning the ins and outs, the good and the bad, the pros and cons of any place is what we aim to do when we travel – to uncover the culture, the norms and the people that are all woven together to tell the whole story.