As the second half of our more than two-month stay in England began, we continued enjoying our long housesit outside of London. There, we celebrated Thanksgiving by cooking our first ever traditional, homemade Thanksgiving meal, watched the Macy’s day parade, the dog show and, of course, some good ‘ol American football to make us feel like we were at home instead of thousands of miles away from our families.

We visited Virginia Water Lake and Great Windsor Park one chilly Sunday to see the famous destination that is rich in history, spanning several centuries. Our 7-mile walk along the beautiful winding pathways took us past tons of gardens and wildlife, a 100-foot totem pole, and a cascading waterfall. We warmed up with a steaming hot chocolate that we bought at one of the several pavilions in the park. 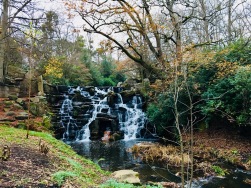 Daniel has always dreamed of going to a football (soccer) game in England so we bought tickets to attend a Reading vs. Stoke City match that happened to be just a short train ride away. We spent the day exploring the town of Reading, visiting the ruins of the Reading Abbey built in 1121. Perfect timing for us, it had been fully restored just last year and recently opened to the public. Yet again, we were moved and inspired to be in the presence of something still standing after 900 years of weathering and multiple destructive events.

The football match was exciting and close, with goals from both teams. As the game was coming to an end and it seemed like the home team was going to take a loss, much of the stadium began to file out, including ourselves. We stopped by the bathrooms on the way out and just then, we heard the stadium erupt in cheers while the fireworks went off to celebrate a home team goal in the very last minute. As we came out of the bathrooms, we heard a guy yell, “Dammit, I missed the bloody goal because I was in the loo!” We couldn’t help but look at each other and crack up from his very British accent, very British words and the fact that we, too, had missed the bloody goal because we were in the loo. Nonetheless, we had a blast and enjoyed the experience and excitement of attending a football match in the country where the sport originated.

For our final trip to London before moving on to Wales, we made a stop at Kings Cross Station and took the obligatory photo at platform 9 3/4 to honor the classic, Harry Potter. 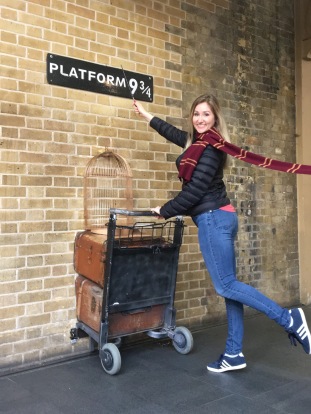 We then headed to Camden Market, the thriving district with over a thousand shops and vendors selling art, fashion, music and food. We enjoyed getting lost among the little stalls, taking in all the sights, sounds and smells and people-watching throughout. There was just so much to see! After it turned dark, we began to see the wonder that is London at Christmastime, with the myriad of lights and decorations at every turn. We can certainly attest that the city undoubtedly lives up to its hype at this time of year. 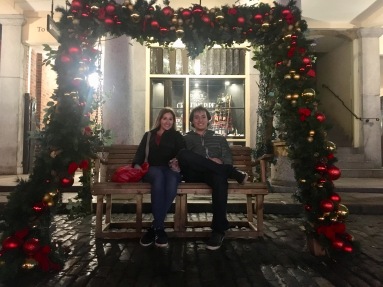 After meandering away from the markets and marveling at the neighborhood’s full-blown holiday spirit, we snuck into a packed pub at just the right time to snag a table next to the Christmas tree. We enjoyed a couple of signature gin cocktails while asking each other trivia questions from the cards left on each table (LOVE this idea!) and listening to the friendly, happy and tipsy Brits all around us. 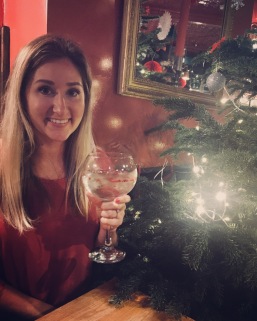 Our next adventure took us to Cardiff, Wales where we checked into our quaint, little hostel next to the river where we were greeted by very welcoming Italian employees, a precious hostel kitty named Sammy, free chocolate cake and the nicest traveling family from Singapore. We got out to explore the city center and found an Indian restaurant where we had the BEST Indian food to date. So good in fact, that I give sole responsibility to that one meal alone for my newfound desire to add India to our travel route.

While the weather didn’t cooperate with us during our weekend in Wales, the cold and the rain certainly did not stop us from getting out and taking advantage of all that it has to offer. We toured the medieval Cardiff Castle and the Victorian Gothic mansion built in the 11th century and walked the long, narrow passages of the Roman fort built in the 3rd century!

After exploring around the Cardiff Bay, we took the bus back to the city center. A man sitting across from us heard our accents and acknowledging that we were tourists, asked if we needed any help finding our way around town. He wished us safe travels and before getting off at the next stop offered us two free coffee cards, just because. Maybe, just because he was Welch and we weren’t and it was his way of extending a warm welcome to his country with the simplest of gestures. And it worked. We certainly felt welcomed in Wales during our short stay there. 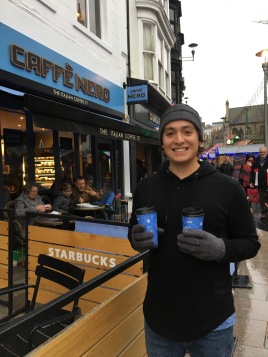 Saying goodbye to Wales, we took a long, northbound train to Manchester where we were greeted by the two most delightful and friendly women at the train station with open arms. They brought us back to their big, cozy house and shared a delicious Turkish meal with us before they set off to their home country of Ireland for the holidays. We were left to look after their sweet kitty Pips and stay warm in front of the wood-burning fireplace.

Being in the city known for the best Christmas markets in all of the UK, we, of course, had to spend an afternoon visiting all eight of them! We sipped on mulled wine, enjoyed some German food from one of the many vendors, sampled lavender and wasabi cheese, and listened to the Christmas music as we worked our way through the maze of vendors. 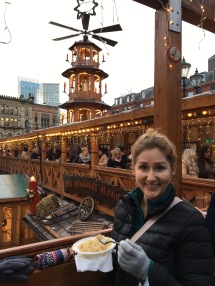 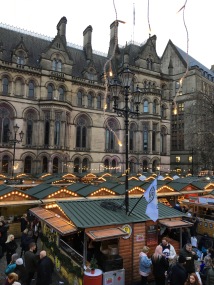 As this year was the first time for both of us away from our families on Christmas, we decided to treat ourselves to a nice Christmas Eve dinner at a celebrity chef’s restaurant in the heart of Manchester. We ordered duck, lobster risotto, ox cheek, cod and the most delectable cheese board with sweet crackers and chutney for dessert.

Our super friendly server suggested that we go around the corner for after-dinner cocktails to a place called 20 Stories, named for its location on the twentieth story of a building overlooking the city. Aside from the fantastic views, the outdoor patio full of heated mini-igloos was the most adorable and cozy place to enjoy our fancy cocktails (requiring a special machine to create a smoky flavor and a process of 10 minutes to make!)

Christmas day was spent eating and drinking in front of the fireplace, playing board games and watching holiday movies. We might have been slightly homesick but we reveled in the fact that we were enjoying our celebration nonetheless and doing so in a beautiful home, in a lovely country, all while living out our shared, lifelong dream.

Surprisingly, the weather was much warmer than we anticipated (average highs in the 50s) so we enjoyed our time there by getting outside often and jogging in the nice park across the street.

Being so close to Liverpool, we decided to take a day trip there during our last week in Manchester. After spending the day exploring this amazing city, we only wish we had more time there. We both agree that Liverpool may, in fact, be our favorite in all of England! As the home of the Beatles, there are Beatles tributes everywhere you look. From Beatles bars to souvenir shops to statues to street musicians playing their music. The city continues to be very proud of their beloved Beatles and is not afraid to show it. 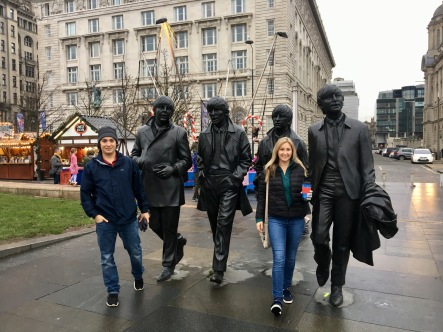 We were impressed by the city’s massive Cathedral, the architecture, the many docks along the waterfront and the energetic, colorful streets of the city center. It was one of those places that just makes you feel so happy and alive to be there… maybe even a place where you would want to live. 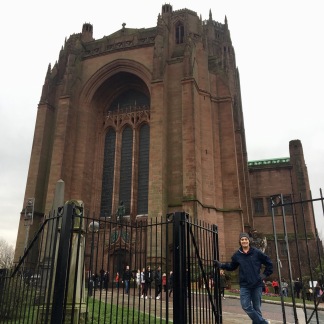 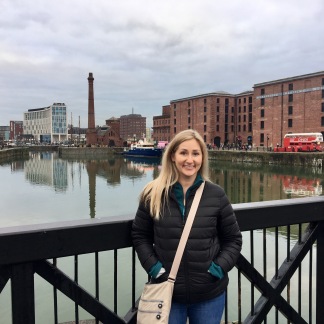 Thankful to end on a high note, it was time to say goodbye to England after ten weeks. We hopped on another long, northbound train to Glasgow, Scotland where we have spent the last week petsitting an unruly, monstrous, terror of a puppy while trying to understand even the slightest of what these Scottish folks are saying.