The second half of our Switzerland adventures all started because of a cow parade. After just missing the ceremony in Lauterbrunnen, we were really disappointed. So we did some research and discovered that there would be another one the following weekend in the eastern town of Mels. We were so excited to have a second chance at witnessing this authentic Swiss tradition where herders bring their cattle down to the valley from the mountains every year for the winter. The farmers dress in traditional costumes, decorate their cows with flowers and bells and parade them through the streets while onlookers cheer and celebrate the beginning of autumn.

Renting a car with Rachel and her friend Gyanu, we made a day trip towards Mels. But first, we hopped across the border to spend the morning in Feldkirch, Austria since we were so close. We walked through the farmers’ market, ate some delicious crepes and toured the city’s castle on top of the hill.

Next, we drove for 30 minutes and arrived in Mels just in time for the beginning of the parade, better known as Alpabfahrt. We walked out onto the sidewalk to see a procession of a large herd of sheep. It was the most chaotic scene as hundreds of sheep were being led by young kids banging sticks on the ground, yelling and trying to coax the herd in the right direction with fruit. The leaders of the sheep pack would stop dead in their tracks, creating a massive pileup throughout the entire herd. Some would turn around and start heading the wrong direction while others veered towards the sidewalk to eat flowers. Watching from along the edge of the chaos, I was reminded that perhaps I was a bit too close as my foot got stomped on by one of the rebellious sheep who refused to follow in line.

We walked around the town, sampled a ton of different kinds of cheese and watched the procession of the cows.

Finally, our day trip took us north to the tiny country of Liechtenstein (that has a whopping 62 square miles!) Stopping in Vaduz, the country’s capital, we stood on the bridge bordering two countries, with one foot in Switzerland and the other in Liechtenstein, saw a 700-year-old house, visited the castle where the prince lives and got an amazing aerial view overlooking the city. 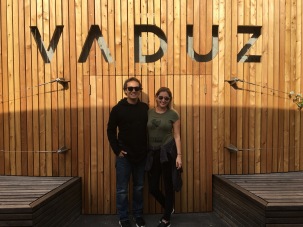 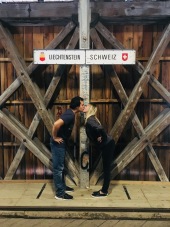 Over the course of one day trip, we were able to visit three different countries and only spent five hours in the car!

In fact, did you know that the entire continent of Europe, with all of its 44 countries, fits inside the United States? This close proximity of countries is what makes traveling here so easy. We have already been to 10 countries here in just three months!

Once back in Basel, the city bordering both France and Germany, we decided to take advantage once again of the easy opportunity to cross over into a new country. We got a last-minute housesit in Freiburg and took a two-hour bus ride into Germany’s Black Forest. We spent the afternoon hanging out with our host and learning about her city. Bruna, a Ph. D student from Brazil studying forestry, was one of the friendliest and most interesting hosts we have yet and we really enjoyed getting to know her.

The next morning, taking Bruna’s advice, we set out on a full day’s hike to explore Freiburg’s surrounding forest. The 10-mile hike took us up mountains, through valleys and around town. We even climbed over 200 stairs to get to the top of a viewing tower that we could feel swaying in the wind. It was really scary but the amazing photos we got made it worth it. 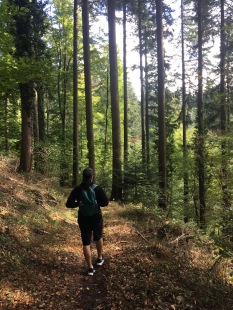 We then explored Freiburg’s center, checked out the city’s book sharing program, took a walk through the park, listened to jazz musicians, enjoyed a typical German bratwurst and onion sandwich from a street vendor, and went inside the Freiburg cathedral, learning that it was the only structure that survived WWII. 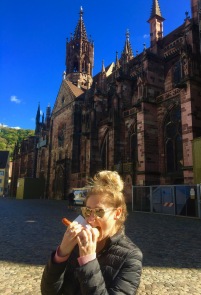 It was a short three days in Freiburg dogsitting little Otto but we fell in love with the city in such a short time. The friendly people, the cheap prices and the stunning nature left us wanting to come back and visit again one day.

Our next stop was Stuttgart, a thriving city known for its Porche and Mercedes-Benz headquarters. We arrived at our hostel that we had booked at the last minute (and which seemed to be the only option of lodging left in the entire city), to find out that I was sharing a room with seven smelly and loudly-snoring dudes. Throughout the day, it smelled like a boys’ locker room and at night it turned into a bear den. It certainly was not an ideal situation, being the only female, but luckily I brought earplugs and managed to get some sleep.

Our first day in Stuttgart, we went to the Mercedes-Benz museum that we had heard so much about and it fully exceeded our expectations. The tour of the eight-story museum takes you to the very top floor where you go back in time to the 1800’s and see the first original cars ever made. From there, you slowly wind down in a spiral through the museum, visiting each floor that represents a new decade of car manufacturing. But in addition to the cars on display, the museum also takes you through the story of world history and you get to see all of the important historical events that took place in chronological order. If you are ever in Stuttgart, Germany, this is a must-see! 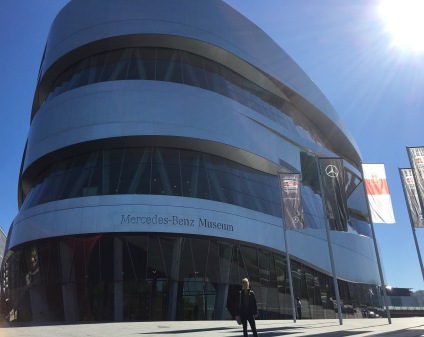 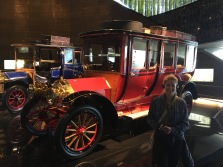 Lucky for us, we also found out the same week that we were in Germany happened to be the opening of Canstatter Volkfest, the world’s second largest Oktoberfest celebration (next to Munich). While we would have loved to extend our trip a couple days to really enjoy it to its fullest, unfortunately, we had another housesit back in Switzerland beginning the following day. So we settled for spending just one afternoon at the event. But it ended up being one of our favorite days in the last five months of our travels so the stinky hostel and the six hours on a late night bus after drinking beer all afternoon was so worth it!

We weren’t sure exactly what to expect of the festival so we got there early and staked out our seats in the main tent where the opening ceremony was being held. We sat down and ordered a beer from our server who kindly informed us how the opening day works. She told us that at 3 pm, a band marches through the tent, an important official gives a speech and there is an initiation that involves tapping one of the beer barrels. And it is at that time the beer starts flowing and the 3-week party begins. But until then, no beer is served. So we patiently waited until 3:00 when the keg was tapped and servers began carrying out the huge beer steins, 12 at a time! We could not believe how much weight one single server was able to carry. They even had their wrists taped to be able to withstand the weight of 12 full steins of beer. 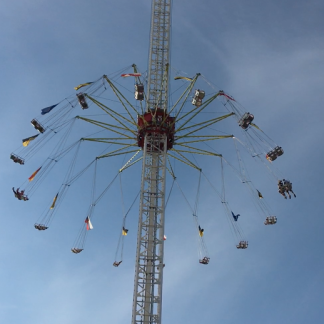 After enjoying a refreshing German beer, we went out to explore the festival grounds and immediately our minds were blown at the massive, insane looking rides. We have never seen anything like the rides they had. After weighing our options, we went for a “chill” swinging ride that went a measly 250 feet in the air over the Neckar river. It was equally exhilarating as it was terrifying.

We walked all around the festival, taking in all the sights, stopping at every other stand for a beer or an authentic German snack and all the while feeling like such a minority as we were some of the only people out of thousands who weren’t dressed in the traditional lederhosen and dirndl. But it didn’t really matter because, in the end, it was one of the most fun and unforgettable days we have had so far.

What followed, however, was not so much fun. We left the festival, got on a six-hour bus back to Basel, had two hours of sleep, left at 4:30 AM and then sat in a train station for ten hours before catching our ride to our next housesit. It was a long and quite miserable day but we endured, made the most out of our sleep deprivation and managed to have a little fun despite the circumstance. 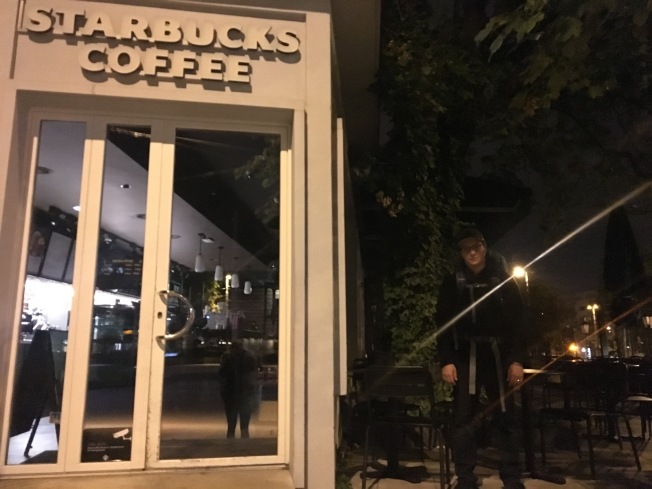 Upon arriving to Küsnacht, the small town on Lake Zurich, our awesome housesit host picked us up at the train station, brought us to his immaculate home and served us some strong, well-deserved cocktails. We took the most rewarding showers of our entire lives, were in bed by 9 pm and slept for 15 hours straight. We woke up the next afternoon in this beautiful, modern, and spacious home overlooking the lake and did not have a single worry in the world. 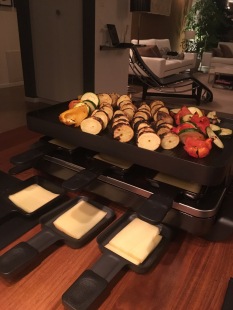 We have spent the last two weeks in this amazing place, eating fondue and raclette on the regular, taking jogs on the lake, having a run-in with Tina Turner, loving on some cuddly kitties, and exploring the nearby city of Zurich. I would say that we are lucky for where we are and for all the experiences we are having while traveling the world but that wouldn’t be fair to say. It’s not really about luck at all. It’s about creating your own destiny through hard work, patience, following your heart, and never giving up on your dreams, no matter how crazy they may seem.