Goodbyes are not always easy. Especially when they signify the end of a trip, a chapter, or perhaps a relationship. We are very fortunate, however, that goodbyes are never difficult for us because we know that there are new adventures, unexplored countries and exciting experiences waiting for us on the other side. Goodbye only means moving on to the next hello.

As we say goodbye to this beautiful country, we look forward to our next stop in Switzerland. But we will certainly carry with us the fond memories that we made here. We loved hearing and learning a different language, experiencing another culture, and enjoying the beautiful sceneries and impressive cities.

Our first unforgettable experience was visiting the vineyards of Valdobbiadene in the mountains of northern Italy. There, we sipped on bottles of prosecco served from a vending machine and ate cheese, salami and olives while looking out on the most stunning views. It felt like something out of a movie. We bought the cheese and meat from a tiny store with no attendant. Just a little room where you choose your cheese from a refrigerator, grab your meat along with a cutting board and knife, then pay for your goods by adding up the prices and inserting that amount of money into a machine. All based on the honesty policy. It was amazing to us that places like this exist because sadly, there are so many places in the world where this type of system would never be possible. 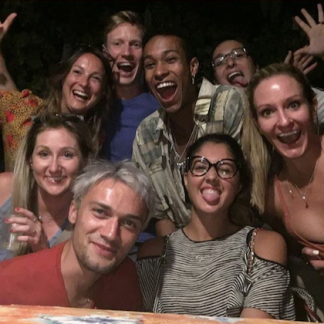 After spending the afternoon and watching the sunset in this magical place, we were just about to head home when a local Italian came to our table. After hearing us speak English, he began to ask us where we were from and what we were doing in Italy. He was very friendly and excited about practicing his English so he invited us to join him and his friends at their table. Of course, we obliged and then shortly after we were joined by another couple from England who are traveling all of Europe in a van that they turned into their home. After five more hours and countless bottles of prosecco later, we had shared lots of stories, laughs, photos and Instagram accounts. We ended the evening with a tour of the couple’s home on wheels and were given an invitation to come visit them when we are in London in November.

The next day, we headed to a small town, Bassano del Grappa where we tried one of Italy’s most popular drinks known as a Spritz. We had seen this bitter, orange concoction made of Campari and prosecco on every sidewalk cafe we had passed, so decided we should give it a try. It was certainly unique but a bit too bitter for our taste. We enjoyed the views looking out over the river, nonetheless. 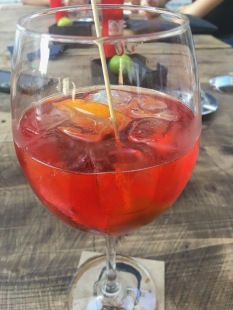 Verona was next on our tour de Italy where we visited the “little Colosseum”, saw Romeo and Juliet’s balcony, touched Juliett’s boobs for good luck, and tried grappa, an extremely potent grape-based brandy that tastes like rubbing alcohol. 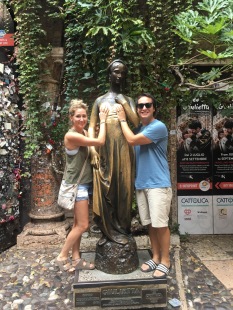 It was here that I experienced my first awkward bathroom situation. I walked into the women’s room and chose the one empty stall. As I walked in, I saw what looked to me like a men’s urinal and I immediately panicked that I was in the wrong bathroom. After confirming that I was in fact, in the women’s room, I realized that this was my only option and just went for it. Aside from being difficult with the potential for making a mess, I can’t imagine that they are saving much money by putting a hole in the floor rather than a toilet. Surely, there has to be a better way… 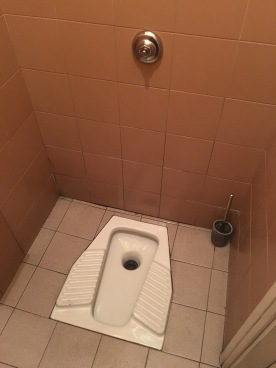 My next awkward bathroom experience was at another restaurant we stopped at for a glass of wine. I followed the signs that said toilette and found my way into an empty stall with the typical hole in the floor that I was now familiar with. While in the stall, I suddenly heard a voice singing in the stall next to me. The only shock about this was that it was a man’s voice! I immediately panicked once again and thought that THIS time I had made the mistake of going into the men’s room and I felt mortified. I waited until the man left the bathroom before making my escape in hopes that no other men would see me. But after all of this worry about being in the wrong bathroom, it turns out that there (and in many other places in Italy) there are no separate rooms based on gender. The toilette is the toilette.

My third and equally embarrassing bathroom moment happened several days later. While following the toilette signs in another restaurant and preparing myself for floor urinals, men in other stalls and any other odd experience that may come my way, I was definitely NOT prepared for what I saw when I opened the bathroom door. There was a man standing there, casually going about his business. I immediately yelled, oh my god, I’m so sorry! and shut the door as quickly as I could. Again, mortified, I later discovered that this bathroom simply doesn’t have a lock. And that was supposed to be normal..? With all of these awkward moments, I learned one thing… normal is completely different in another country.

We knew our Italy experience wouldn’t be complete without seeing Florence and Rome so we took the train to spend a long weekend exploring these two iconic cities. In Florence, we saw the 500-year-old marble statue, David created by the Italian artist Michaelangelo, walked the famous bridge, Ponte Vecchio and stumbled upon an action movie set where we got to see stunt drivers during a getaway scene. Getting to watch multiple takes of this adrenaline-pumping scene was probably one of the coolest things we have experienced on our travels. Can’t wait to watch the movie Six Feet Under next year when it comes out on Netflix!

That afternoon we went to check into our AirBnb and were greeted by our host. He seemed very excited to show us around our place while practicing his very limited English but it wasn’t until he saw our US passports that he got overly excited and spent the next 10 minutes telling us all about his upcoming vacation to New York. Then as he was leaving, he asked us if we would take a selfie in our room and send it to his boss. We were both thinking that maybe they wanted a photo for their reviews or for some sort of marketing material. So we were both extremely confused when our host followed us into the bedroom and just stood there in anticipation. He then asked, do you have your phone ready, at which point we realized he actually wanted to be in the selfie with us! We were humored and thought it was cute, albeit a bit odd at the same time. Apparently, just being American was novelty enough to warrant a group photo. 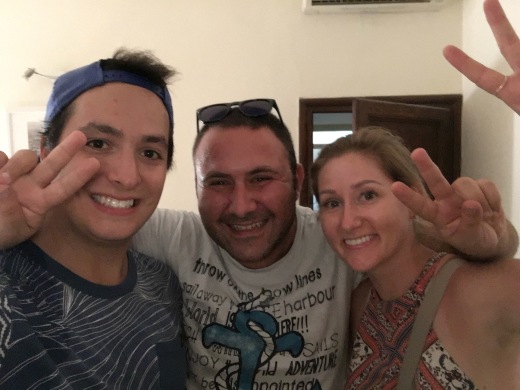 We almost didn’t make it to Rome because we thought we wouldn’t have enough time but we decided it would be worth our while to make time. So we extended our visit one night and made Rome a priority, which surely did not disappoint. This awe-inspiring city makes you feel so small when you’re walking the streets and looking around at the massive structures and architecture that tower over the city streets. Every single creation in Rome is a wonder not only because it is super-sized but because it is hundreds (and some, even thousands) of years old. It is truly mind-blowing to imagine how the Romans were able to build such monstrosities with such limited tools and technology.

Before heading back up north, we could not leave Rome without visiting the Vatican City. Although we couldn’t make it inside and see the world-famous Sistine Chapel due to a mile-long line, we at least got to enjoy the massive columns, surrounding wall and the outside of the St. Peter’s Basilica. 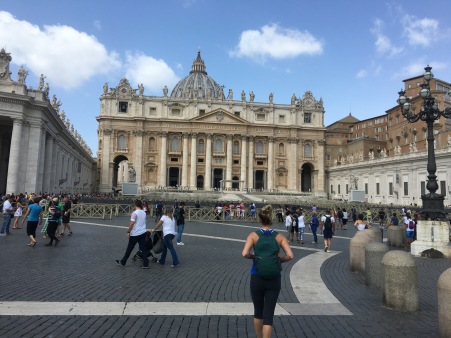 Venice was another must-see on our list so we took a day trip there to walk the tiny, old sidewalks and see the canals and gondolas that make the backdrop of every view picturesque. It was a quaint, charming city and one that we were glad we didn’t miss.

Finally, our last stop on our way north to Switzerland was Milan, our number one European city where we could see ourselves living. Maybe it was the clean, quiet, tree-lined streets of the neighborhood where we stayed, or the interesting and fashionably dressed people that we enjoyed watching, or the perfect blend of modern living and historic architecture, or the amazing and reasonably priced food, or the fact that it was the least touristy feeling city in Italy… whatever it was about Milan, we both felt like it was somewhere we would like to settle down one day. 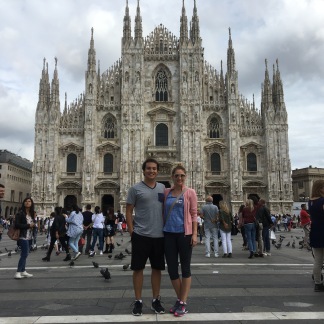 During our stay, we also took a three-day trip to Croatia, one of the countries we dreamed about visiting since our journey started a little over four months ago. To get there, we had to cross the entire country of Slovenia, which looked like a fairy tale. We only wish we would have had the opportunity to stop and enjoy it a bit more.

It was only a little over a three-hour car ride to get to Rijeka, the third largest city in Croatia, just after the capital city of Zagreb and Split. This coastal town on the Adriatic Sea has several beaches that have been awarded the Blue Flag, a certification based on environmental, safety and accessibility standards. We visited a couple of them and enjoyed swimming in the cold, calm waters. 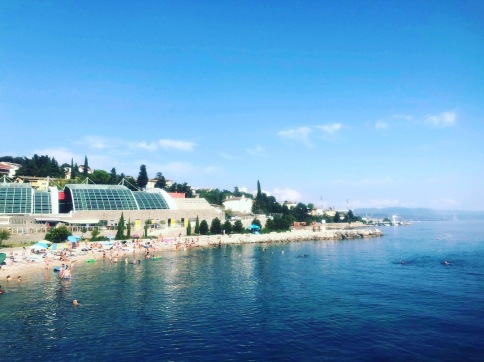 We also visited Rijeka’s highest point at the Trsat Castle which overlooks the entire city, the sea and the mountains. The views from the top of the castle were breathtaking.

Overall, in the fourteen days we spent in these two countries, we traveled approximately 1,300 miles in cars, trains, and buses allowing us to take in all the incredible sites; mountains, lakes, rivers, bridges, tunnels, charming little towns and big cities. We certainly made the most of our time here.

Also, during our two-week stay, we ate more Italian food than we’ve eaten in our entire lives and to give an honest review of this culture’s cuisine would be to say that while it is good, it is far from varied. Italian food equates to one food group… carbs. Consisting of bread, pasta, pizza, potatoes… and more bread, it seems that there are some very important food groups missing. After two weeks of an Italian diet, I was having serious vegetable withdrawals. Sure, they might sprinkle a few olives or mushrooms on their pizza or pasta, but as far as an actual full serving of vegetables, forget about it. So, while we did have some of the tastiest pizza ever, Italian food just doesn’t have enough variation for us to say we loved it. 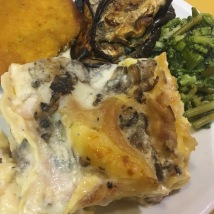 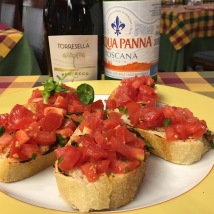 After covering so much ground and visiting many of the cities we had dreamed of on this trip, there is still an entire southern half of this country that we hope to explore one day. Maybe we will just add that to our next world tour’s itinerary. 😉