As our adventures in Central America come to a close, we reflect on how grateful we are that our four weeks here have been super chill, relaxing and all Pura Vida (as the locals say, to mean good vibes).

But it didn’t exactly start that way. We experienced a near-disaster, which almost kept us from entering the country to begin with. After standing in line at immigration for what felt like forever, we finally made it to an official. We greeted him in Spanish, answering all of his questions and providing him with the many documents he was demanding.

The process was extremely intimidating, as it felt more like an interrogation than a conversation. It was still going smoothly, however, until he asked for the one piece of the puzzle that we were missing – an exit ticket out of the country. In all of our research, we had somehow failed to discover this one small, but very important detail.

After continuing to sternly lecture us, the official kept saying that he could not let us in the country without proof that we would be leaving, without exception. Distraught and panicked, we were almost certain we would be sent on a plane, straight back to Mexico where we had come from, at our own expense.

Lucky for us, however, the ultimate decision for us to pass through immigration was at the sole discretion of the official. For whatever reason, he believed our story and gave us the benefit of the doubt. We were through. But not without learning a hard lesson in what NOT to do when entering a country. (After doing more research, we discovered that this requirement is strictly enforced in Central America, while not being an issue in most other countries).

Due to the nature of our world travels, we have only purchased one-way tickets, one country at a time, to keep everything open and flexible for change. We don’t have rigid plans and we don’t adhere to strict schedules because we know that new work opportunities may open up for us.

It has only been two months on the road and already we have modified our original route many times. Sometimes due to safety concerns, other times because we fell in love with a place and wanted to stay longer, and others because we were chosen for a housesit. But no matter what our reason for changing it up, we always maintain a “go with the flow” attitude.

After barely dodging a bullet at the airport, things began to look up after that. We were greeted outside immigration by a friend of the Moreno family, Sonia who gave us a ride back to her house and offered us a nice meal and a place to stay for the night.

The following day, we went to the Aguilar house and I was reunited with my host family, who I lived with eight years ago when I was studying abroad. Although it was a short stay, I have always and will forever consider them my Tica family and hold them in a very special place in my heart.

Mama Tica even remembered my favorite Costa Rican dish, patacones and made them for us during our afternoon visit.

We then hopped on a bus and headed for the Pacific coast where we stayed at Jacó beach in the coolest lodging arrangement ever! The cylinder was just big enough for a bed and a bookshelf but it was super cozy and quaint.

We got so excited when we discovered the beach volleyball tournament taking place the next day. We showed up to find out that it was 2 on 2 and that I was the only female on any of the teams. But instead of worrying, we brought our KC skills to the court and ended up dominating the first round. We then went on to the final, where we were playing against two Venezuelans in a fun and friendly match. Just as we were in a race for the win, one of the opponents dove sideways to save a ball and came down hard on his right shoulder. The minute he stood up, he grabbed his arm and while staggering back and forth as his face turned white, he started to pass out. We are not sure if it was the pain or the shock of having a dislocated shoulder, but it was really scary to witness.

Needless to say, we won the tournament. We were awarded a couple of cold beers as our prize and the losing team was awarded a couple of beers as a consolation for their injury.  And the Venezuelan kid was okay after popping his shoulder back into place and passing out a couple more times. 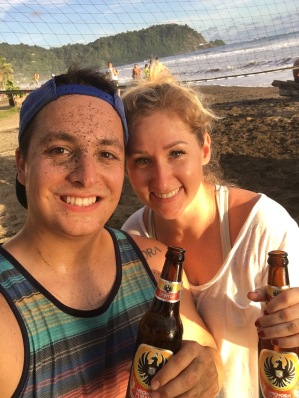 From there, we took a bus, south to Manuel Antonio where we had an unforgettable housesit in a beautiful house overlooking the Pacific Ocean. Located on the edge of the national park, we spent two weeks watching monkeys play all around us from the windows, the patio, and the pool. 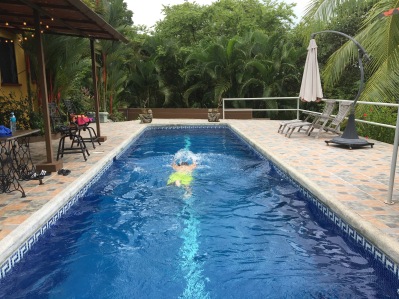 We hiked the national park, saw wildlife throughout the deep jungle, and walked the pristine beaches. 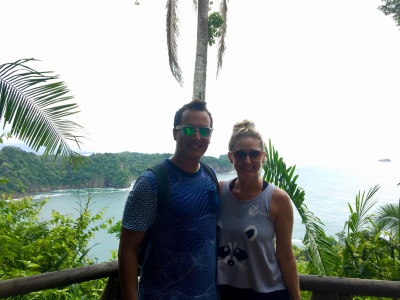 Our next adventure led us to the Nicoya Peninsula, which took six modes of transportation to arrive; 3 busses, 2 taxis, and a ferry. By the time we arrived in Santa Teresa, we were completely exhausted by a long day of travel. The first thing we were told upon check-in to our hostel was that the entire town would be out of power the following day from 7 am – 3 pm. And here, without power, also means without water.

We woke up that day in the dark, wondering how we were going to 1.) Brush our teeth 2.) Make breakfast 3.) Buy anything, anywhere in this town. In that moment, we realized just how much we take these things for granted.

So we followed the advice on the signs of all the closed shops in town that said, “Sorry, we are closed. Go enjoy the beach.” So we did. We went out and had an absolute blast getting beat up in the waves, lost two pairs of sunglasses to the ocean, and got the worst sunburns from a cloudy sky that we have ever had.  And it was so worth it.

We returned to the hostel’s pool in the afternoon, where we met a couple of crazy Australians who spent the rest of the day entertaining us along with all of the other guests from the hostel by sharing three bottles of vodka along and their insane, party-going ways. We met people from all over the world and made friends from Australia, Canada, Turkey, Ireland, and Mexico. It truly was a cultural exchange and a lesson in how to take a less than ideal day (no power or running water) and turn it into one of the most memorable days we have had yet on our travels.

The following day we returned to San Jose (after traveling for 10 hours in a bus) where my Tica family graciously allowed us to stay with them for the night. Early the next morning, we were back on a bus, headed for the other side of the country towards the Carribean.

When we arrived in Puerto Viejo, we checked into our 6-person dorm in our hostel and got settled in. We decided to give the dorms a try this time around, in order to stay on budget. Up to this point, we have had the luxury of staying in private rooms everywhere we go.

To say that it turned out to be a nightmare experience, would not begin to describe our first night there. At first, upon meeting our super chill, polite German roommates we thought it was going to be all good. But later, a Costa Rican couple joined our room and proved that they were there to party. And party they did … until 5:00 in the morning, while coming into the room every 30 minutes throughout the night, waking us up every single time.

So at 5:00 am, we finally fell asleep. Only to be awoken again at 6:00 to the sound of the Costa Ricans’ alarm clock (who were too drunk to hear it going off). We had to get out of bed to wake them up and yell at them to turn it off. But instead of turning it off, they would hit snooze every time, forcing us to yell at them again to turn it off. This continued for over an hour until finally, all four of us (the two of us plus the Germans) got up and went to lay by the pool to try and get some rest.

In the end, we switched to a private room and decided that the dorm life is not for us.

After several days in Puerto Viejo, we packed up and headed for Panama. We had read that the trip would take us three hours… but that was not taking into account the three additional hours it took us to go through immigration and customs on both sides of the border.

The whole process involved these very official government buildings and a walk across the bordering river on foot:

Our destination in Panama was Bocas del Toro, a province made up of hundreds of small islands. During our stay, we went on a tour that took us around to five different islands where we saw dolphins, starfish, sloths, and tons of beautiful fish as we snorkeled through the coral reef. We also got to explore the famous island Cayo Zapatilla, where the TV series, Survivor was filmed. It had the most beautiful, picturesque beaches we have ever seen (next to Holbox, of course!) and is one of our favorite adventures thus far. 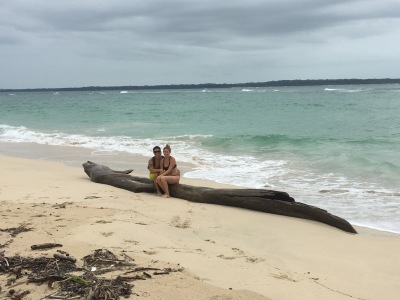 Overall, we have had a lovely time in Central America and have enjoyed the biodiversity, the food, and the Latin-American vibe. Tomorrow, we get on a 10-hour bus and return to San Jose to get to the airport so we can fly to our next destination.

Stay tuned! Check out our FB and Instagram to see where in the world we end up next 🙂