Today, we are packing our bags and getting ready to hit the road… again! As we prepare for our next big adventure in Costa Rica, it is not without some mixed feelings. While we both share the excitement of new experiences in new places,  we must also say goodbye to this beautiful country that we have come to love.

Over the last six weeks, we have covered hundreds of miles, visiting nine different states and dozens of cities and towns, soaking up every ounce of colorful, delightful culture, food, natural beauty, and architecture. We are so very grateful that we were able to begin our journey here in Daniel’s home country and feel so fortunate to have gotten the complete Mexico experience.

During our four-week stay in Mexico City, we spent every weekend traveling to surrounding states. Our first weekend, we traveled south to the state of Guerrero visiting Las Grutas de Cacahuamilpa, the most impressive underground caves that you could ever imagine. We took a 2.5-mile trail deep into the caves, below the mountains, where we were blown away by its magnitude and beauty. We enjoyed searching for all of the realistic faces, animals, and shapes found in the stalactite and stalagmite formations.

From there, we continued on to Taxco, a Puebla Magico, or Magical Town, as named by the country’s tourism department. As one of the world’s largest silver mining towns, it is built on the side of a steep mountain. The brick streets and colonial charm made it feel like we had stepped back in time.

Our next weekend trip was to the west in El Estado de Mexico where we visited the Nevado de Toluca, the tallest volcano in the country. It took us 45 minutes to drive to the top, along a bumpy and narrow road. As a backseat passenger, the altitude and motion almost got the best of me! But we finally reached the top and we were beyond excited to hike to the crater. Unfortunately, however, there was a dangerous lightning storm that had just approached with accompanying hail and fog and it prevented us from going any further.

On our way back to Mexico City, we stopped by the city of Toluca where we visited the Cosmovitral, a gorgeous indoor botanical garden.

The third weekend trip was to the state of Puebla where we visited our favorite city in the entire country, also called Puebla. We both decided that if we were to ever move to this country, that is where we would live! There, we rode the tallest transportable Ferris wheel in the world, went to the circus, saw the unofficial 8th wonder of the world, Capilla del Rosario and ate the best mole ever. 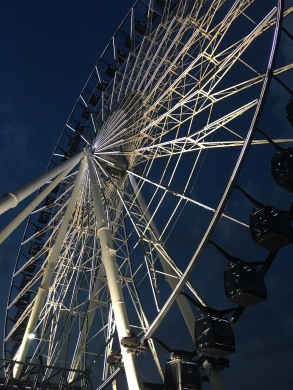 We traveled a bit further north to the town of Cuetzalan the following day and arrived at an Air BnB that we had booked online. As we pulled into the driveway and looked around, we immediately were sketched out and began discussing plans to bail. There was no one in sight and the building looked dilapidated and deserted. So Joyce, Daniel’s mom took charge and went inside to check it out. A few minutes later, she called for us to join. As soon as we walked inside the house, we were welcomed by a warm, friendly indigenous woman and noticed a beautiful, clean and spacious interior. She showed us around the house and quickly dispelled any skepticism that we previously had. We changed our minds and our attitudes and ended up having one of the nicest stays that we have had in all of Mexico (complete with a cozy fireplace, board games and fresh pan dulce). Here, we learned a great lesson in how not to judge a book by its cover.

The next morning we woke early, layered on the sunblock and repellent, and followed our friend, Gonzalo on a two-mile hike into the dense jungle where we found an amazing waterfall and were able to enjoy it all to ourselves.

Our fourth and final weekend trip was to Pena de Bernal to attend the wedding of our longtime friends, Kevin and Jesica. On the way, we stopped by two vineyards, La Redonda and Freixenet where we sampled wine and stocked up on reds, whites and bubbly. We took advantage of the high quality and low prices!

The wedding was the following day, at an outdoor venue with the monolith as the backdrop. It was absolutely stunning. Perfect weather, gorgeous flowers, delicious food and a happy couple made for a lovely day. 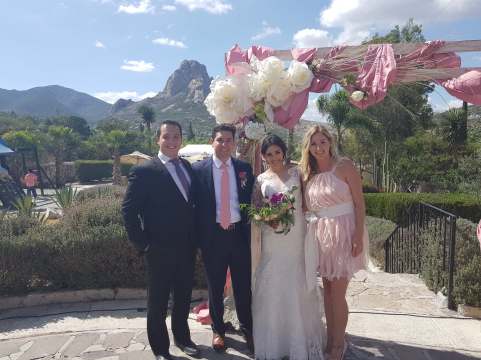 We feel that we have truly taken advantage of every single moment that we have been here. Even on days that we weren’t being tourists and sightseeing, we were still actively pursuing online work, researching and planning our upcoming travels, and taking care of business (dentist, optometrist, driver’s license, etc.).

Since we started planning our world travels over a year ago, we have been extremely conscientious of safety as our number one priority. We have taken many precautionary steps to ensure that we remain happy, healthy and free from harm while on the road. We are very realistic about the dangers of traveling and by no means, take it lightly. Our preparations began months before we even left the US; from immunizations to traveler’s insurance, to international SIM cards, to registration with the US Embassy, to international bank accounts. We spent hundreds of hours researching how to travel the world safely. And no matter what the media will tell you, we truly believe that it can be done. Otherwise, we would not be here, doing what we are doing.

We keep safety as a priority on a daily basis; we don’t travel at night, we never get separated in a crowd, we are always mindful at ATM’s, and we are always alert and aware of our surroundings. We have done everything we can think of in order to avoid dangerous situations and people. We even drastically changed our route through Mexico in order to avoid two states that are known to be dangerous for tourists.

Even with all the precautions in the world, however, unavoidable circumstances may still arise while traveling in third world countries and we encountered one here in Mexico City one week ago.

As we were boarding the subway, four men surrounded Daniel, pushing him onto the train just steps behind me. They pushed from all directions forcing his arms to raise and immobilizing him. In that moment of chaos, one of the men reached into his left pocket and stole his iPhone. Immediately, he realized what was happening and turned to see who had done it. A man to his side pointed to the subway station saying, “He ran that way.” Just as the doors were closing, Daniel grabbed my hand through the cluster of people and pulled me off the train as we ran in the direction that we thought the thief had gone, hoping to catch the attention of the three policemen who were just steps away.

Moments later, we realized that there was no one running. The thief was the one on the train who had misled us in the wrong direction. We felt defeated. And broken. And discouraged. And violated. It took us several days to regain our motivation and desire to continue on our journey. It would have been easy in that moment to want to give up and go back home but we realized that sadly, these situations are commonplace for tourists in big cities and there IS even more that we can do to avoid them in the future. We took this incident as a learning experience and will not let it stop us from pursuing our dreams. In the end, it was just a cellphone, a material thing and it has already been replaced. Along with our confidence and passion to keep moving forward. 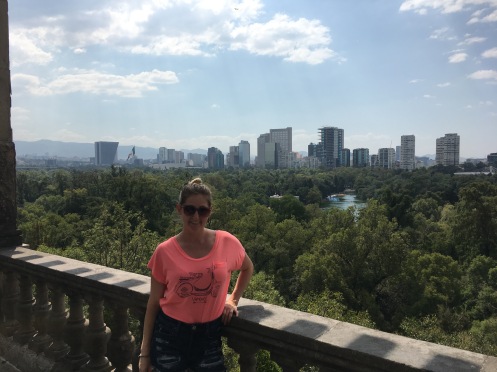